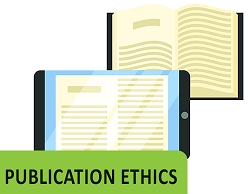 All the parties involved in the act of publishing (the author, the journal editors, the reviewers and the publisher) should agree upon the standards of expected ethical behavior. Publication ethics statements of the journal are based on the Committee on Publication Ethics (COPE) Best Practice Guidelines for Journal Editors and it is expected that the authors, reviewers and editors will abide the best-practice guidelines on ethical behaviour contained therein.

Duties of the Editorial Board:

The Editorial Board of the journal Diplomatic, economic and cultural relations between China and CEEC consists of experts from the University of Veliko Tarnovo and external renowned scholars both from Bulgaria and China.

The Editorial Board discusses signals for violations of the ethical rules with the criticized author, considers whether such violations have grounds and whether to publish an apology to the readers and affected persons in the next issue of the journal. The Editor-in-Chief has full authority over the entire editorial content of the journal and the timing of publication of that content.

Editors and editorial board members will not use unpublished information disclosed in a submitted manuscript for their own research purposes without the authors’ explicit written consent. Privileged information or ideas obtained by editors as a result of handling the manuscript will be kept confidential and not used for their personal advantage. Editors will recuse themselves from considering manuscripts in which they have conflicts of interest resulting from competitive, collaborative, or other relationships/connections with any of the authors, companies or institutions connected to the papers; instead, they will ask another member of the editorial board to handle the manuscript.

The Editorial Board evaluates the submitted manuscripts exclusively on the basis of their academic merit (importance, originality, study’s validity, clarity) and its relevance to the journal’s scope, without regard to the authors’ race, gender, sexual orientation, ethnic origin, citizenship, religious belief, political philosophy or institutional affiliation.

The Editorial Board supports the Publishing house through correct layout of the manuscripts, meeting the draft issues deadline (30 November of the current year) and in its efforts to distribute the journal effectively.

Editors and editorial staff will not disclose any information about a submitted manuscript to anyone other than the corresponding author, reviewers, potential reviewers, other editorial advisers, and the publisher, as appropriate.

The Editorial Board accept articles, reviews, interviews and portraits, unpublished so far and consistent with the current technical standards of the journal.

Certificate of acceptance of a paper for publication is issued only on the basis of an Editorial Board meeting record, which states the explicit affirmative decision on the above mentioned publication based on the conclusions of the Board.

The authors are solely responsible for the accurate citation of the sources they use, as well as for the originality and scientific contributions of their research.

Duties of the Reviewers:

Reviewers sign a declaration stating that they will accept for reviewing only materials against which there is no bias and conflict of interest in terms of texts and their authors. An invited referee who feels unqualified to review the manuscript should notify the editors and decline the invitation.

Reviewers should keep all the manuscripts confidential and must not show or discuss them with others, except if authorized by the Editor-in-Chief.

According to the reviews’ evaluation, a material can be returned for further corrections or rejected. Personal criticism of the authors is inappropriate.

The decision of the Editorial Board should not to be conferred to third parties. In case of two contradictory reviews (acceptance and rejection) the article should be submitted to third reviewer-arbitrator who determines its final status.

Duties of the Authors:

The papers to be published should express the author's right of opinion in a fair manner that does not undermine the authority of opponents and does not support propaganda and/or unconstitutional elements. Authors should ensure that they have written and submit only entirely original works, and if they have used the work and/or words of others, that this has been appropriately cited.

The manuscript should contain sufficient details and references to permit others to replicate the work.

Authors should—at the earliest stage possible (generally by submitting a disclosure form at the time of submission and including a statement in the manuscript)—disclose any conflicts of interest that might be construed to influence the results or their interpretation in the manuscript.