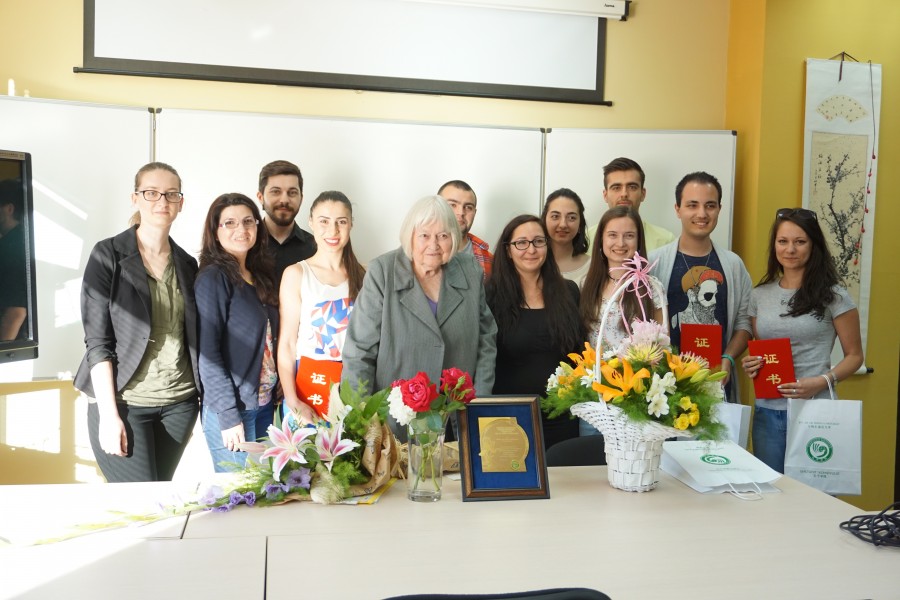 On May 22nd 2018 prof. Bora Belivanova was invited to the Confucius Institute at the University of Veliko Turnovo to deliver a public lecture on Beauty in the Works of Poets and Writers from Ancient Asia. After the lecture prof. Belivanova was awarded with an honorary plaque for a her enormous contribution to the development of Chinese studies at the University of Veliko Tarnovo and of the Confucius Institute.

Prof. Bora Belivanova is one of the first and most prominent Bulgarian sinologists. Since 1966, she has been working as a Chinese language teacher, since 1980 – associate professor, and since 1994 – professor of Chinese literature. In the period 1990-1992 she was a Bulgarian language lecturer at the Beijing Foreign Studies University, and since 2002 has been teaching Chinese language and literature at "St. Cyril and St. Methodius" University of Veliko Turnovo. She has published scientific papers in Russia, Poland, Germany, Czech Republic, etc. and is the author of textbooks, books and anthologies. Prof. Belivanova is also known as a leading Bulgarian translator of ancient, medieval and contemporary Chinese literature texts, editor-in-chief of “China” Magazine and associate in Bulgarian Encyclopedia (Chinese Mythology and Literature). Her scientific achievements and contributions for the development and promotion of Chinese language and culture in Bulgaria make her one of the most respected sinologists.

On this day graduating students from UVT also received honorary diplomas and awards for their contribution to the development of the Confucius Institute at our university. They had the honor to be personally awarded by the doyen of the Sinologists in Bulgaria – prof. Bora Belivanova.